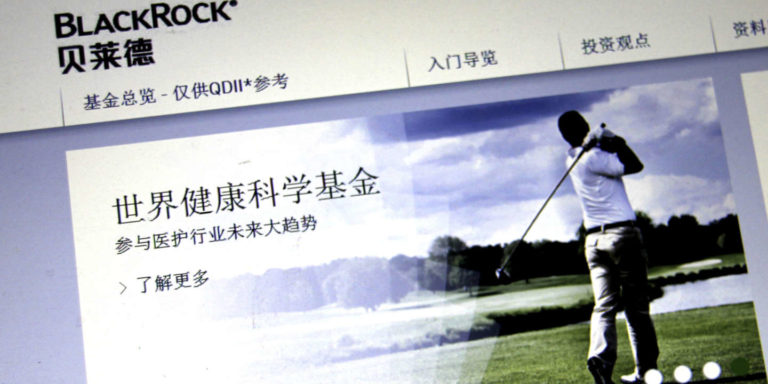 TOfter ten years of effort, BlackRock triumphs in China. But is this the right timing? The world’s largest financial investor has finally won the Grail. It is the first foreign finance company authorized to launch an investment fund in the country without going through a local intermediary. Called New Horizon, this fund, barely launched, has already fulfilled its mission. It has gathered the commitment of 110,000 Chinese professionals who have invested 6.7 billion renminbi (880 million euros).

The new horizon targeted by the American is that of the considerable Chinese savings in need of valuation. Everything Wall Street has bankers and funds of all kinds is eyeing this loot. Fidelity is also preparing to launch a mutual fund (mutual fund) of the same ilk and all are also preparing offers for the great fortunes of the country. BlackRock launched its own in May, with the China Construction Bank and the Singapore sovereign wealth fund (Temasek), and Goldman Sachs did the same with Chinese bank ICBC.

This enthusiasm is therefore understandable, but it suddenly becomes delicate, even politically explosive … In the Chinese business world, there will be a before and an after Ant Group (ex-Ant Financial), this subsidiary of the giant Alibaba brutally banned from introduction on the stock market in 2020 by political decision. This episode marked the beginning of a spectacular turn of the screw from Beijing towards, in particular, digital companies. After Alibaba, there was Didi Chuxing, the Chinese Uber blocked administratively just after its IPO on the New York Stock Exchange, then the tutoring companies banned from making profits on their activities, and finally the assault on video games whose China is the world leader with Tencent. Lots of cold showers, especially for foreign investors who saw the valuations of these groups suddenly collapse.

This is why, in a vitriolic tribune of the Wall Street Journal, on September 6, the famous investor George Soros castigates “The dramatic error” BlackRock and its boss Larry Fink, bad for its investors and also for American democracy. For him, the American fund does not see that for the Chinese leader Xi Jinping, all the companies in the country must be at the service of the party, whether they are nationalized or private. But Beijing, so hard on Washington, still needs American finance to resolve fundamental questions such as the aging of the population and the colossal indebtedness of its real estate sector. Should the decoupling of economies affect finance? Between George Soros and Larry Fink, Wall Street is torn apart and wonders. The rest of global finance too.