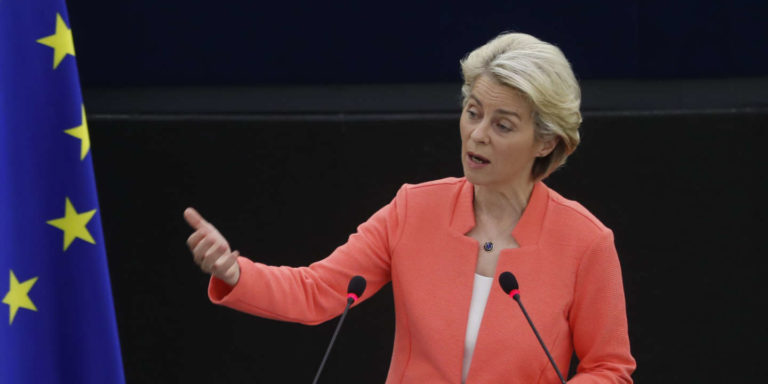 “Aukus”, named after the partnership sealed between the United States, Australia and the United Kingdom on the supply of nuclear-powered submarines, continues to make waves. Faced with the fury of France, which sees a huge contract slipping away from it, London and Washington tried to coax their ally this weekend.

The President of the European Commission, Ursula von der Leyen, ruled on Monday, September 20, “Unacceptable” the way France was treated. “We want to know what happened and why”, she told journalist Christiane Amanpour, on the American news channel CNN.

Exclusive: @EU_Commission President @vonderleyen reacts to the AUKUS fallout. “One of our member states has been tr… https://t.co/XGj24U4m2Z

” President [Joe] Biden asked to speak to the President of the Republic [Emmanuel Macron] and there will be a telephone exchange in the next few days ”, said Sunday, the spokesperson for the French government, Gabriel Attal. “We want explanations” on what “Is akin to a major breach of trust” and know “How they intend to get out of this contract”, with some “Compensations” the key, he said on the BFM-TV channel.

Australian Deputy Prime Minister Barnaby Joyce also tried to ease the crisis on Monday, saying his country “Does not need to prove his attachment to France”, by evoking the soldiers sent to fight during the two world wars.

Referring to these difficult periods in French history is unlikely to lessen the anger of Paris, which has repeatedly attacked Australia since the announcement last week of this rupture of contract for the purchase of French submarines for the benefit of American nuclear-powered ships. Mr. Macron recalled the French ambassadors in Canberra and Washington in an unprecedented gesture. He was to meet with them on Sunday evening.

A meeting scheduled this week between the French Minister of the Armies, Florence Parly, and her British counterpart, Ben Wallace, has been canceled at the request of Paris, Agence France-Presse learned on Sunday evening from a source at the French ministry. .

Read also Submarines: Australia claims to have expressed its concerns to France upstream, Paris denies and denounces the “duplicity” of its allies

British Prime Minister Boris Johnson stressed on Sunday the“Immense importance” of the relationship between the United Kingdom and France. Both countries have “A very friendly relationship” Boris Johnson told reporters on the plane that took him to New York, according to the British agency Press Association. “Our love for France is ineradicable”, he assured during his trip to the United States, where he is to attend the UN General Assembly and meet Joe Biden at the White House.

The United States, Australia and the United Kingdom announced on Wednesday a strategic partnership to counter China, Aukus, including the supply of American submarines to Canberra. “This partnership is in no way intended to be a zero sum, it is not intended to be excluding, said Boris Johnson. It’s not something anyone has to worry about and especially not our French friends. “

The recent US contract for submarines with Australia could trigger a “Nuclear arms race” in the region, ruled on Monday, North Korea.

“These are extremely undesirable and dangerous acts which will disturb the strategic balance in the Asia-Pacific region”, reported the North Korean state news agency KCNA, quoting an official from the North Korean foreign ministry. “This shows that the United States is the main culprit that endangers the international system on nuclear non-proliferation”, we added.

On Wednesday, the launch of two North Korean ballistic missiles towards the sea was followed by that of a ballistic missile from a submarine by South Korea, thus becoming the seventh country in the world to have this advanced technology.

Washington, ally of Seoul, immediately ” sentenced “ the Pyongyang shots, carried out “In violation of several UN Security Council resolutions” and who represent “A threat to the neighbors”.

North Korea is subject to multiple international sanctions for its nuclear weapons and ballistic missile programs. Nuclear talks with Washington have been suspended since the failure of the Hanoi summit in February 2019 between North Korean leader Kim Jong-un and then US President Donald Trump.