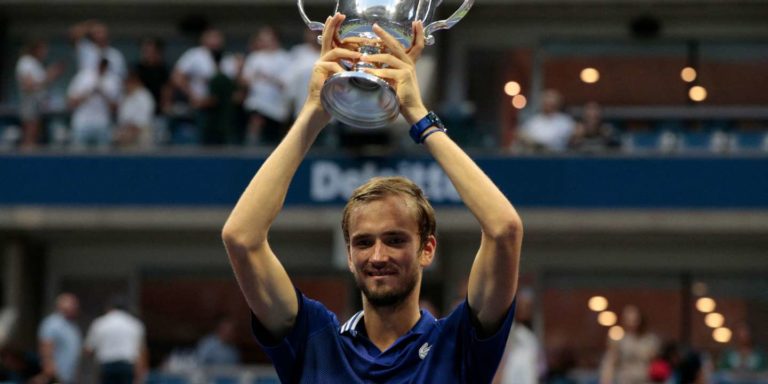 Novak Djokovic has been overtaken by the weight of history. Very close to making a little more of his imprint on the tennis legend, the Serbian lost, Sunday, September 12, in the final of the US Open against the Russian Daniil Medvedev (6-4, 6-4, 6-4 ). A dry and unexpected defeat which deprives him of a fourth coronation in New York, but especially slows down his quest for the ultimate title, that of “GOAT” (Greatest of All Time), the best of all time.

Because, Sunday, Djokovic had a sacred opportunity to silence the skeptics considering him the third man of the trio he forms with the Spaniard Rafael Nadal and the Swiss Roger Federer. He could overtake his two rivals in the total number of victories in Grand Slam tournaments (they were all three at 20 before this final).

After having already lifted the trophy at the Australian Open, Roland Garros and Wimbledon, he could also come to equal the American Donald Budge (1938) and the Australian Rod Laver (1962, 1969) by winning on all major tournaments in the same year.

“I consider myself the best, otherwise I wouldn’t be talking openly about winning Grand Slam tournaments and making history”, declared moreover, a bit provocative, Novak Djokovic, just after having equaled Rafael Nadal and Roger Federer at the last Wimbledon, in July. A way of remembering that it was he who had the wind at his back in the hunt for records that the three men are engaged in.

Unable to raise his level

But this breath suddenly fell on the Arthur Ashe court in New York on Sunday. The fault, in particular, with a Daniil Medvedev who had announced before the meeting “Do not care Of the potential records of his opponent. After spending this season next to his final at the Australian Open, against the Serbian already (7-5, 6-2, 6-2), the protégé of the French Gilles Cervara wanted his revenge. By winning entry on the service of his opponent and four aces in two service games, the tone was set.

On the other side of the court, Novak Djokovic could not shake the pressure on his shoulders. This nervousness, we had seen it throughout the tournament. Thus, after his success in the quarter-finals against the Italian Matteo Berrettini, the Serbian, questioned by the former American player Patrick McEnroe on the prospect of achieving the calendar Grand Slam, had steered, responding firmly “I don’t want to talk about that”.

The loss of the first set to Daniil Medvedev (6-4) did not necessarily have much to worry about for the Serbian, who had already recovered a set behind in his last four rounds. But, unlike his semi-final against the German Alexander Zverev, the “Djoker” failed to raise his level of play to bring him to the level of this final.

Worse, he seemed physically exhausted and unable to bend his opponent in the exchange until a defeat that seemed inevitable, by dropping points on his service. quickly at the start of each round. Despite a break conceded at the time of conclusion, it was Medvedev who won to register his name on the list of Grand Slam winners.

Even in the event of victory, the debate on the famous GOAT would not have been settled anyway. But this title would have given arguments to supporters of Novak Djokovic, including Alexander Zverev, as he explained after his lost duel against the Serb: “If you look at the stats, and you stick to tennis, he’s the greatest of all time. He breaks all records, no one can compare to him. “

If Novak Djokovic came close enough to caress his dream with his fingertips, it is above all because he went to seek his Swiss and Spanish rivals in their dens. First against Roger Federer at Wimbledon, in 2019, where he went to steal the crown of the master of the house in a final with a Hitchcock scenario (7-6, 1-6, 7-6, 4-6, 13 -12). Then at Roland Garros this year, after a daunting fight against Rafael Nadal in the semi-final (3-6, 6-3, 7-6, 6-2).

So what more does it take for Djokovic to be considered the best? The Master 1,000 won record? It is already he who co-owns it, tied with Rafael Nadal (36 titles). The number of weeks spent in the place of world number one? This Monday he started his 338e, absolute record. The Serb is also the only one to have won at least twice each of the Majors.

Tears and a standing ovation

Paradoxically, Novak Djokovic may have found in this defeat what he sought for a long time in victory. The Belgrade native has always run behind the titles, but also after the love of an audience that only has eyes for its two rivals. In the third set of the final, we saw him in tears in his briefcase as the 23,000 spectators of Arthur Ashe Stadium reserved him a standing ovation worthy of a winner.

And now ? Novak Djokovic remains in the best position to clinch the record for the number of Grand Slams won. Especially since none of his historic rivals can currently defend his luck on a tennis court. Roger Federer has just undergone a third knee arthroscopy in a year and a half, while Rafael Nadal appeared a few days ago on crutches on Instagram after receiving treatment for his left foot.

Still, the opportunity to achieve the perfect Grand Slam season may not come again for a long time for 34-year-old Novak Djokovic. He will have to deal with the new generation finally ready to take up the torch, like the Greek Stefanos Tsitsipas, Alexander Zverev and, of course, Daniil Medvedev.

At 25, and after two failures in the final in a major tournament, the Russian is the first of this “Next Gen” to win in a Grand Slam. World number two, he now appears as the possible successor of the “Big Three”.

Read also For Daniil Medvedev, the US Open final is an opportunity to change dimension