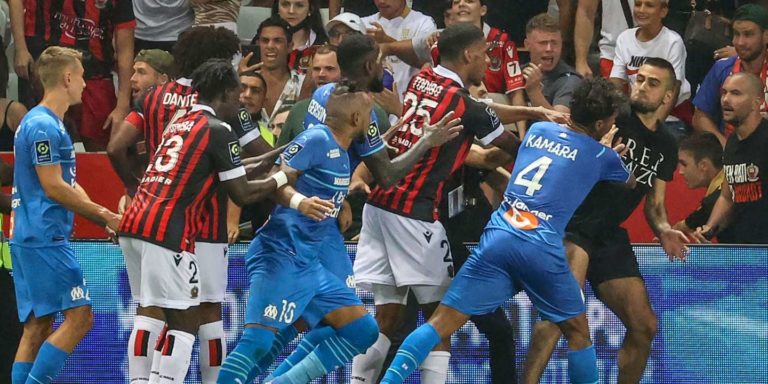 The Football League (LFP) has decided. And severely. Exceptionally met for several hours in a hotel on the 15the arrondissement of Paris to study this exceptional file, its disciplinary committee announced, Wednesday, September 8 in the evening, that the Ligue 1 match between Nice and Marseille, interrupted on August 22 after serious incidents, will be replayed on neutral ground and in camera.

In total, OGC Nice is sanctioned with three games behind closed doors, the first having been served on August 28 against Bordeaux, as a precaution. The second will be the one against OM to replay and the third… the derby against neighboring Monaco, on September 19.

In addition, the Nice club (which led 1-0 at the time of the facts) receives two penalty points, one of which is suspended. This decision is reminiscent of the one that hit Metz in January 2017, for the firecracker throws that hit Lyon goalkeeper Anthony Lopes, causing the match to be stopped. The Moselle formation had been punished by a withdrawal of two points … transformed into three points suspended after appeal. OGC Nice can appeal to the Higher Appeal Commission of the French Football Federation. The appeal is not suspensive with some exceptions.

On the Marseille side, the Spanish defender Alvaro Gonzalez receives two games of suspension, while his teammate Dimitri Payet is suspended for a suspended match. Pablo Fernandez, the physical trainer for OM who punched a Nice supporter who entered the pitch, is suspended from the sidelines, referees’ locker room and all official functions until June 30, 2022.

“What was essential for us is the degree of importance of the incidents, which constitutes an extremely high level of disorder, almost unprecedented, and which should lead the commission to enter a zone of sanctions which is itself even, very severe and very high ”, explained Sébastien Deneux, the chairman of the disciplinary committee, to the journalists gathered by videoconference.

Read also Nice-Marseille: a member of the OM staff suspended; Nice-Bordeaux behind closed doors on Saturday

These sanctions are the consequence of incidents that occurred during the match, on August 22, of the 3e Ligue 1 day between Nice and Marseille. The meeting was interrupted at the 75e minute after OM player Dimitri Payet, who was about to take a corner, had been the target of ultra Nice supporters. Hit in the back by a plastic water bottle, the playmaker returned the projectile to the audience.

Dozens of Nice supporters had then invaded the lawn, causing a general fight between supporters, players of the two teams and members of the management of the two clubs. The Spanish defender Alvaro Gonzalez had also participated in the clashes, in particular by sending a ball into the platform of the ultras.

This Wednesday, Dimitri Payet and Alvaro Gonzalez left, in the early evening, the Parisian hotel where the LFP had auditioned them, followed by their coach Jorge Sampaoli. The three men had arrived shortly before 4 p.m.

The Nice delegation, led in particular by President Jean-Pierre Rivère and coach Christophe Galtier, had arrived a little earlier in the day.

These sanctions are “Up to the seriousness of the incidents which had an absolutely exceptional impact and which nonetheless concern a marked attack on the physical integrity of football players, which is obviously totally unacceptable”, explained Sébastien Deneux.

Read also Incidents during the Nice-Marseille match: “We have the impression that the stadium was able to serve as an outlet even more than usual”

“Despite the circumstances of this match, the behavior of Dimitri Payet and Alvaro Gonzalez appeared to us to be punishable on a disciplinary level”, he added, specifying: “For Payet, the sanction takes into account the fact that he was directly hit by a bottle and then hit by a kick from a spectator, which was not the case for Alvaro. “

Olympique de Marseille did not welcome these decisions. “We are extremely shocked by the sanctions that have been taken against Alvaro and even Payet”, the club’s communications director Jacques Cardoze told Agence France-Presse (AFP). “We have the impression that we needed a scapegoat on the OM side and that it was he who took the lead. It is violence that must be condemned, not the players in the game ”, he added.

The consequences of this controversial match will not stop there. Several investigations are underway on the judicial aspect. The Nice supporter author of a kick in the direction of Payet, now under judicial control, will be tried on September 22. Another, accused of giving a Nazi salute, was remanded in custody on Friday pending his trial scheduled for October 13, for “Apology for a crime against humanity”.